What Is HVAC System | HVAC Basics

Heating, Ventilation and Air Conditioning, commonly abbreviated as HVAC, is a sub-branch of mechanical engineering. The HVAC system is used for providing thermal comfort to the occupants of the building. It is responsible for systematic air circulation and controlling the humidity, temperature and quality of air inside the enclosed area, in order to provide a comfortable environment to the occupants of the built asset.

HVAC or Heating, Ventilation and Air Conditioning is a part of the mechanical discipline, which is again a part of MEP.  The HVAC system for a building is divided into three different systems like heating, ventilation and Air conditioning. All the systems play a vital role in providing a comfortable environment to the people by maintaining the temperature and quality of the air inside a closed area.

Heating basically provides warmth to the people inside a building. It creates a warm atmosphere using a central heating system. A central heating system for a built space consists of several components like a heat exchanger, blower motor, combustion chamber, condenser, evaporator, and thermostat.

As a layman, we might just be knowing a single function of ACs that cools the environment, but that’s just a part of its function. The Air Conditioning systems in an enclosed area of the built asset purify the air, cools the enclosed area, dehumidify the space and provide ventilation for a better environment inside the building.

How Does HVAC Work in High Rise Building? 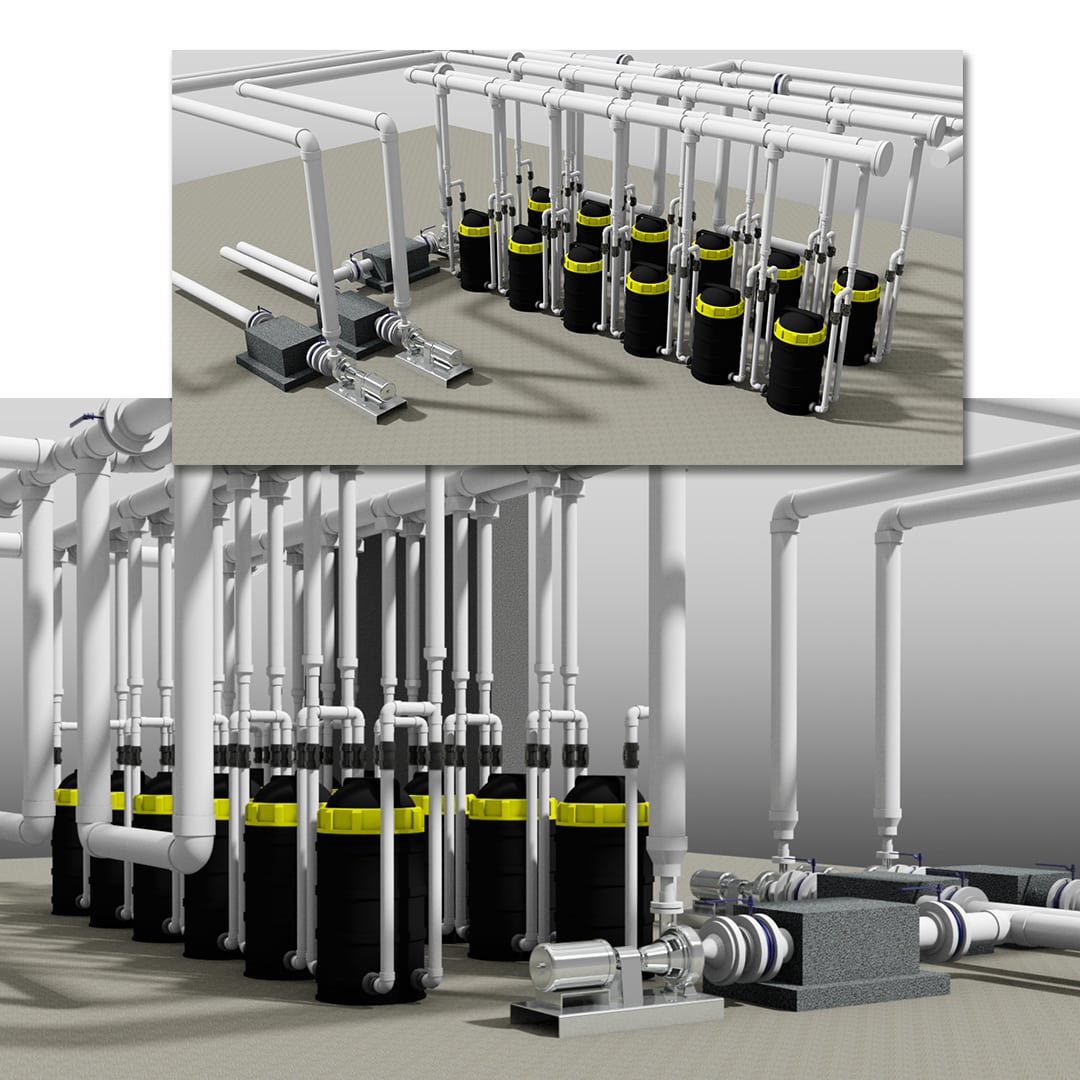 HVAC systems sometimes referred to as climate control systems, consist of three chief elements for their working. They are: –

> A distribution system such as duct or pipes for distributing the desired airflow, and

A centralized Heating, Venting and Air Conditioning system in MEP for a building facilitates both, heating and cooling, in a building. The central HVAC system consists of a source for warm and cool air, a distribution system and a control unit.

The components forming the central HVAC mechanical system of the building circulates the warm air as well the cold air in the closed structure through a distribution system in order to provide thermal comfort. The heating and the cooling system in HVAC work on a principle, that is the heat transfers from a warmer object to a cooler object.

During the winters, a thermostat which is a regulating device uses fuels like oil, gas or electricity to produce heat. Similarly, the air conditioner uses refrigerant gas in order to produce cool air during summers. The refrigerant gas inside a coil cools down to a liquid state.

When the warm air comes into contact with the cooling coil, the air cools down. It is then circulated around the building space through a distribution system consisting of a network of pipes and an outer unit. Both heating and cooling work in a similar way and are used for improving the air quality and making the environment comfortable.

What Does MEP Means in Construction? 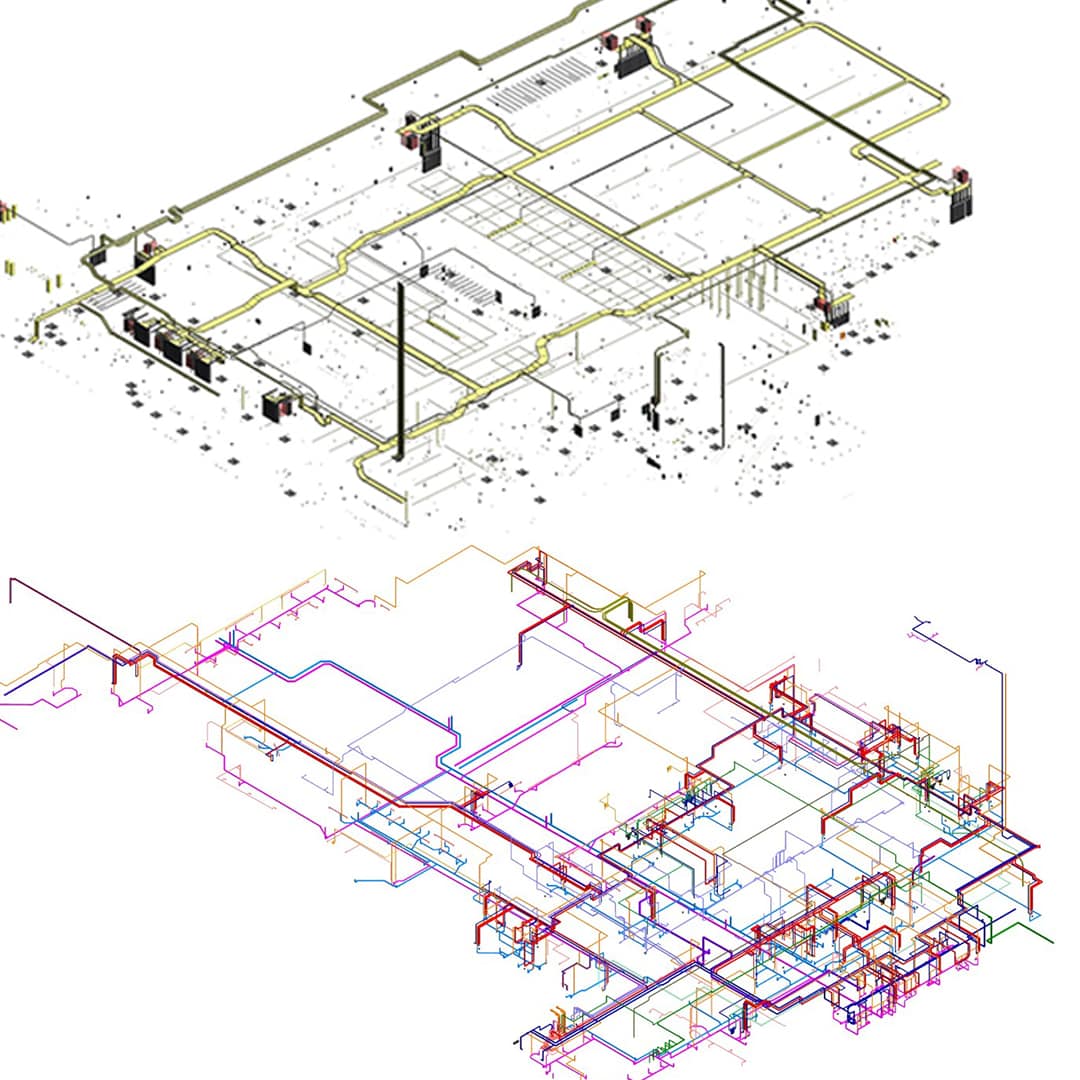 MEP, an abbreviation for Mechanical, Electrical and Plumbing, is one of the chief systems in a building. It facilitates the occupants with a pleasant living experience and makes the building more habitable. MEP system of a building is responsible for making the built facility liveable and pleasant.

However, the mechanical, electrical and plumbing systems are also referred to as a central nervous system of a building or a structure. It is difficult to imagine an acceptable living without a proper MEP system in a building. MEP services provide sustainable solutions for projects across various industries incorporating MEPF design in Construction.

MEP also includes a new discipline, known as fire-fighting in it. It is denoted by the letter F and can be written as MEPF.

If you want to know more about MEP in building construction, you should read about the role of MEP Plans in Construction of Building and Industrial Projects.

A mechanical system in a facility mainly deals with the heating, ventilation and air conditioning of the building in order to provide a comfortable environment. HVAC is a subdiscipline of mechanical systems, in MEP.

The HVAC and mechanical systems regulate the temperature inside of an enclosed structure by necessary cooling or heating. Mechanical ventilation facilitates a route of conveyance of air, in order to allow keep the level of pollutants lower.

Dehumidification of an enclosed space is also carried out by the mechanical components installed in a building. An effective mechanical design of a building involves a clash-free and optimal solution for the installation of several components of HVAC systems.

Electrical components are an important part of the building systems. The electrical systems in the building facilitate illumination, heating, cooling, mechanical ventilation, etc. It provides power for electrical appliances that are commonly used in residences and offices, such as lights, fans, computers, printers, etc.

Not only for small appliances, but it also facilitates industries with power supply for running huge machinery. An effective electrical design of a building facilitates optimal routes for electrical wiring.

It also provides a clash-free model/drawing of electrical wiring and conduits for a hassle-free installation process. Mechanical systems in MEP is also depended on electrical systems as all HVAC components like ACs and heaters require electricity to run.

Another arrangement of pipes carries wastewater and solid waste particles from your houses to the sewerage area. The plumbing systems are designed in such a way that they do not collide with other arrangements such as mechanical pipe structures.

The fire safety system of a building includes a network of pipes for water, dry risers, hose reels, fire hydrants and sprinklers. In addition to these components, fire and smoke detectors and fire extinguishers are also included.

What Is the Difference Between MEP and HVAC?

MEP and HVAC are two different components. An HVAC system is a subdiscipline of a Mechanical system in MEP. However, the MEP and HVAC are interconnected with each other, both of them have some differences. Let’s explore some of the major differences between HVAC and MEP –

An MEP system consists of various disciplines such as mechanical, electrical, plumbing, and firefighting. An HVAC system in a building serves as a single entity.

As we know, MEP includes various components, its design is quite complex as compared to the design of an HVAC layout.

The installation of MEP components is easier due to its complex design. Whereas, the process of installing HVAC systems is quite easier than the MEP systems.

Factors Affecting the Cost of a New HVAC System

As we are aware, installing a Heating, Ventilating and Air Conditioning system in a building facilitates its occupants with a pleasant environment, making the place liveable. It provides thermal comfort to the people in the building. However, there are a few factors that affect the cost of a new HVAC system for a built facility. Let’s see each of them in detail below.

Design of the HVAC System

The design of an HVAC system mainly depends on the design of the structure and components included in it. A structure with a complex geometry may incur heavy costs for HVAC components, while a system with a simpler design incurs relatively lower costs.

Size of the Built Facility

A building or a built facility with a relatively larger area requires more HVAC components and its relevant material, which turns out to be more expensive, and vice-versa.

The efficiency of the system

Installing or replacing an HVAC system in the building increases it’s the building’s efficiency. However, the system providing more efficiency to the building structure will cost more than that of a less efficient system.

What Are the Different Types of HVAC Systems?

Every HVAC system, like any other system, comes with some great features. It is obvious that a system with more features will empty your pockets, while a system with just some basic features is relatively cheaper. The cost of the system also varies with different makes and models.

An HVAC system, also known as a heating, ventilation and air conditioning system, is a part of the diversified MEP. It is a subdiscipline of the mechanical system. The HVAC components like air conditioners, heaters and mechanical ventilators provide thermal comfort and create a liveable pleasant atmosphere in the enclosed space of a building facility.

The system is capable to serve the occupants of the enclosed space with both, heating and cooling as per their requirements. It facilitates the building with energy efficiency, however, it depends on the type of HVAC system adopted by the people.

HVAC being an integral part of building systems facilitates people with several advantages such as enhanced air quality, lower consumption of energy and cost-efficacy. These are some of the many advantages of installing an efficient HVAC system.

Technology is still improving gradually and due to technological advancements, the HVAC components system will become less expensive and more efficient in future.

Use BIM Automation to Automate Modeling and Design Activities