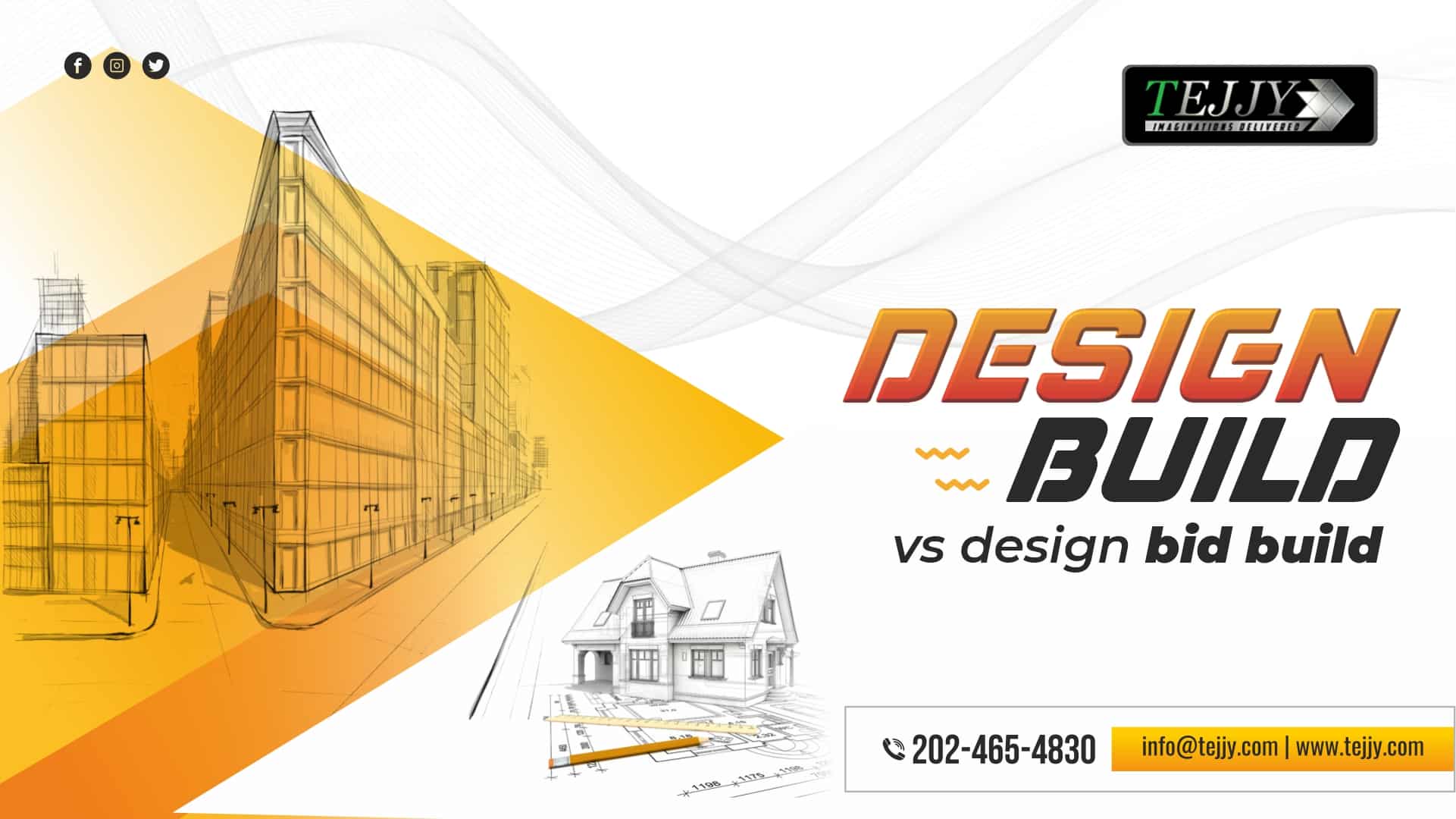 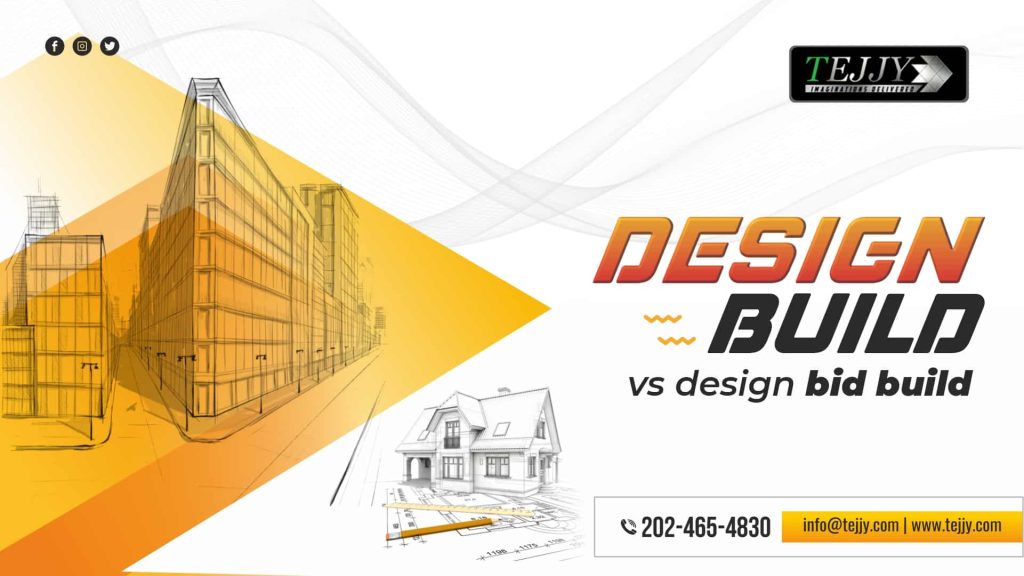 There are various modes of Construction that are being used by the Design Build construction companies in the AEC industry. But the top two methods which have captured the market are Design bid Build and Design-Build. While it seems there is only word of difference but the design process and planning involved with each method vary tremendously.

What is Design Bid Build?

What is Design-Build Service in Construction Management? 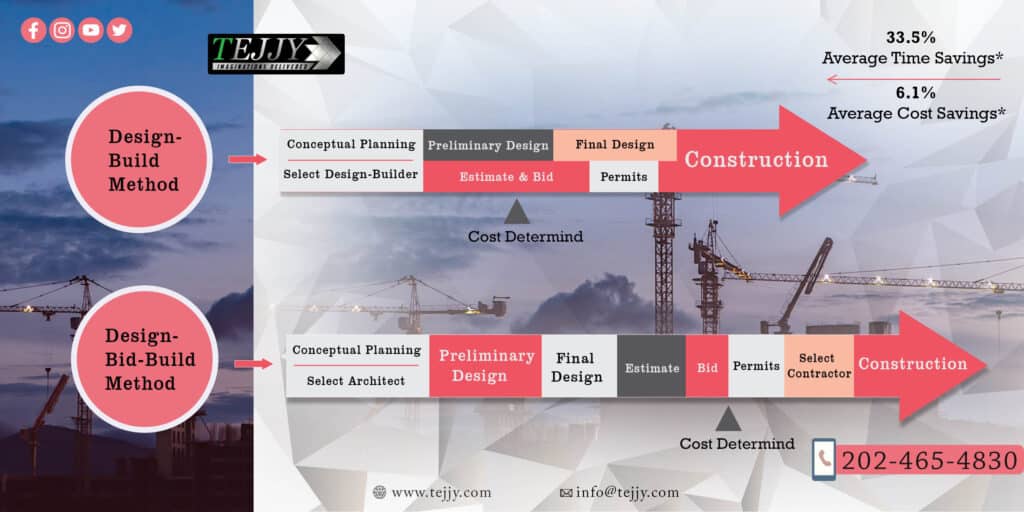 The design-build service in Construction Management is also known as the Integrated Project Delivery. It is the method in which the project is being contracted by the design-builder and is subdivided into architect-led-design and contractor-led-design. In this, the design-build contractor is wholesale responsible for all project works as well as legal remedies. A design-build firm collaborates with various subcontractors, design consultants as per the need of the project to deliver a quality project on time within budget.D/B approach is being compared to the master-builder approach which reduces risks and overall cost of the project.

Even though hardbid and D/B methods would result only in excellent building design . Still, the key differences between the two methodologies would help you to decide and choose the best method construction technique for your project.  The Pros and Cons of Design-build and Design-bid-build are discussed below.

Advantages of Design-Build in Construction Management:

As the building design and construction both are performed by a single team it reduces the risk involved in construction. In this method team due to teamwork, the construction team give their input throughout the design process on the other hand the design team is available to solve any issues arising at the time of construction

As both the design and construction team works collaboratively to achieve a common goal there is no timeline gap between the two phases of building construction. Work is completed out seamlessly in a very efficient and effective manner

Earlier the design-build method of construction can be easily formulated as per the owner’s budget and needs. The design-build firm selected or the manager who is responsible for the whole project formulate the team members as per the budget of the project owner

As there is no bidding process involved the owner can not select the d/b firm as per their own price. Hence the price tends to be higher in this. Additionally, no Design-build firm began their work unless and until they are under contract thus making it tough for the owner to compare.

The design-build firms have various 3D models that they tweak and use as per the Building owner’s request. The owner doesn’t have a choice of a personalized design when considering the Design-build method of Construction

There is very little or no involvement of the owner with the team members being selected for project completion. Earlier every design-build guarantee of the owner involvement but once  construction process get started at its full pace the owner is being consulted only on as need basis and major decision are being made by the commercial design-Build firm or the project manager

As designer and contractor are hired separately, the owner has to control the project pricing. The designer for home building design is being selected as per the price range of the owner. The owner has complete control over the project from start to finish in the Design Bid build method of construction

In the Design Bid Build method of construction, the project needs to completed in a certain period of timeline. Hence there is no overlapping of the phases and it becomes easier to find out where the project is going at every phase. Thus giving you a better project clarity

In Design bid build the designer and contractor are not working in tandem and that’s the reason there is an increase in complications during the time of project execution. Whether it is the design aspect or documentation at every phase some or other issues arises which leads to an increase in the cost of making the project.

Since the designer as well as the builder both need to be appointed at various time intervals thus by default it takes time. The timeline gets exceed further if any complication arises in the middle of the project and both are finger pointing each other. Thus leading to project stoppage or extra time for complete project completion

As the builder is not involved in the designing process there is a surety of miscommunication between the designer and the builder. This no involvement of the contractor at the earlier stage would lead to various issues being found at the later stage which need to be identified and work on earlier only. Thus there is a lack of communication which overall effect the quality of the project

Difference between Design-Build and Design-Bid-Build

The basic difference to begin the journey is that design-bid-build process is traditional construction technique incomparison to design process. The traditional talks about having a contractor and a designer whereas the other overlaps designing phase and construction phase emphasizing on single entity role termed as design-builder or design-build-contractor. Whereas the debate on design-build and design-bid-build is still on-going. A set of critics believe that architect/designer plays a pivotal role in the early design drawing phase. They support by stating that a contractor and architect has different perspectives about construction drawings. Design-build supporting critics answer back by stating ” Value engineering is brought in the initial stage of design drawing to reduce design errors”. Adding to the

In the end, it can be said that both method of construction management  is being used. Lastly all it depends on what is most important to you as owner:

Once you get the answer to these questions you would have an idea to select the best method of construction as per your needs and desires.